Passion erupted in America in opposition to ObamaCare. It appears that this passion is waning.

From WND.com: (The WND article relies on a Rasmussen Reports survey.) 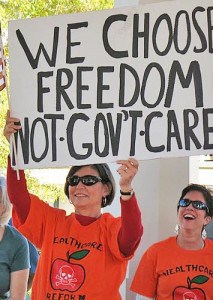 Outrage over the Patient Protection and Affordable Care Act, commonly called “Obamacare,” gave rise the tea-party movement and fueled a historic cleaning out of Congress in 2010, but new poll data shows the fervor is fading, as fewer and fewer Americans demand the controversial health-care reform’s repeal.

For the first time since the act was passed, a new Rasmussen Reports poll shows, less than half of respondents are demanding an end to Obamacare.

According to Rasmussen’s weekly survey of 1,000 likely voters â€“ the most recent taken on April 29th and 30th â€“ now only 47 percent of respondents favor repeal, while 42 percent want to keep the legislation.

Furthermore, the opposition to repeal has hovered around 40 percent for more than a year, but the percentage of those who want to reverse Obamacare has been steadily declining â€“ from a peak of 63 percent last May, to the low 50s early last month, to 47 percent by the end of April.

This is why it is so important for us to teach and spread Principle. ObamaCare is just as much of a disaster now as it was when it was passed. There is quite literally a long term war going on between two very different ideas about the role of the national government in our lives. One set of ideas will lead to greater and greater tyranny, the other will lead to liberty and personal responsibility.

I urge you to consider principles and maintain a long term opposition to ObamaCare.

I suspect that the law was deliberately written in such a way as to leave time in it’s implementation for opposition to wane.

If we don’t elect a new president and give the Senate an overwhelming Opposed-to-Obamacare majority I fear we will be stuck with this mistake and our children and grandchildren will grow up believing that they would not have health care without being slaves to the state.