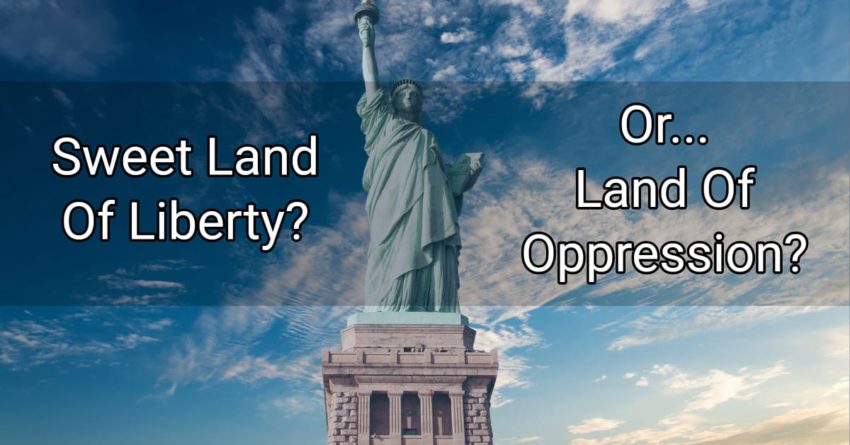 You are being bombarded on every side.

So which is it?

We Americans live in a nation that at one point participated in the kidnapping, sale, and enslavement of our fellow human beings.

We Americans live in a nation that continued to oppress those people even after ending that slavery by means of a bloody and horrific civil war.

We Americans live in a nation that on more than one occasion violated the rights of the native people who were here before it existed.

We Americans live in a nation that is the only nation that has ever killed human beings with nuclear weapons.

We Americans live in a nation that is currently leading the way in a global holocaust – the murder of the unborn in the womb.

We Americans also live in the nation that has probably done more than any other nation in history to promote liberty in the world.

We Americans live in a nation that has been the dominant world power in an era of unprecedented human prosperity and improvement (although far from perfect).

We Americans live in a nation that God has used mightily in the advancement of the Gospel in the earth.

And, hey, only Americans have walked on the moon!

We have been a City On A Hill to the Glory of God.

We have been a source of mourning to His Heart – He grieves at every oppression!

I could go on.

So which is it?

The world we live in doesn’t really have a good answer to that. You have to pick your side.

But Christianity does have answers!

These answers comes from the very nature and state of humanity.

As a nation made up of fallen human beings made in the image of God (both past and present) it is possible for “America is Great” and “America has done great evil” to be both true at the same time!

One thing I have noticed about the Bible is that when God created a great nation (ancient Israel) and wrote their story in a book He did not hide their sin.

When the heroes of Christianity, the first Apostles, wrote down the story of the early Christians they did not hide even their own sinfulness and silliness!

They actually highlighted it.

The leaders of the greatest movement in the history of our planet did not hesitate to show themselves for what they really were: fallen made-in-the-image-of-God humans in the process of redemption.

America is made up of the same kind of human beings.

There has been an amazing presence of Christianity and an amazing neglect of it’s principles – both at the same time.

He told them another parable: “The kingdom of heaven is like yeast that a woman took and mixed in with three measures of flour until all of it was leavened.”
~ Matthew 13:33 NRSV

The Kingdom of God has come into this world.

It has been growing since Jesus was here physically.

It will continue to grow.

It affects all of the dough.

It is spreading. It is making the world better and better.

But the full manifestation of this Kingdom is not complete.

This is the story of each of us as individuals (have you ever noticed that there is much God has redeemed about you while you still have the propensity to sin – and sometimes go there?)

I submit that the same is true of whole peoples that have been influenced by God.

God has brought some beautiful things into the world through the American Story.

And I have no problem with those phrases today.

But I prefer “America’s Providential History” and “Heritage” because it is about God and what He has done and is doing.

We don’t need to hide the sins from the history of our nation.

We don’t need to pretend current sins do not exist.

Nor do we need to stop delighting in the great things God has done in the world through our nation.

Our nation’s story is a human story and a Divine story.

Our nations story is one of Redemption and Revival and of Sin and Mourning.

Is America Great or is America Infected With Sin?

Celebrate America Today – delight in the victories and triumphs.

Mourn and grieve and repent over sins past and present while crying out to God for real revival and reformation.

Let the Kingdom Come in the USA – and the World!